‘I love all species of our native ducks...‘ 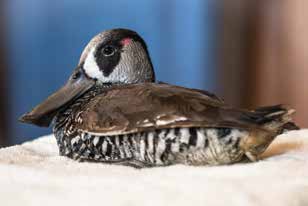 I love the presence of tiny ducklings at Bohollow and watching them grow so quick, within eight weeks newly hatched ducklings transform from tiny balls of fluff to flying wanderers of our wetlands.

Most people are familiar with our more common species in this area, the Pacific Black Duck, the Australian Wood Duck and possibly even the Grey and Chestnut Teal but fewer people realise we have a species which stands quite alone with its unique features and habits.. the Pink - eared Duck.

These ducks are very small, as small as a Teal, yet have a large, broad bill larger than a Pacific Black Duck’s bill. They also have very distinct colouring and markings. Their body is covered in black zebra stripes, the head has large eyes set in a black facial mask with the striking flash of fluorescent pink behind the eye which has earnt them their name.

Pink - eared ducks are highly nomadic and not very common in this area any more, though when they are seen, they can sometimes be in large flocks of 100 or more ducks. The reason they are so nomadic is due to their specialised feeding habits.

These beautiful little ducks have a bill which is unique amongst ducks. Their large, broad bill is quite flattened and they have the addition of two flaps of skin which drape down the side of the upper bill, concealing the serrated ‘teeth’ on the edge of the bill which our other dabbling ducks possess. They are true filter feeders. They sift microscopic food items, both animal and plant, through their specialised bill. They like to hit wetlands when they are receding as this is often a rich source for their unique diet of fresh water plankton and algae. Tiny insects, water fleas, ostracods, copepods, floating seeds and some plant matter are all items consumed by Pink - eared ducks. For this reason they are usually found on shallow, stagnant fresh water sites. They rarely leave the water except to travel and drought is the only time these ducks will take refuge on deeper water.

These little ducks move through the water with their bills submerged up to their eyes. They draw water through the slightly opened tip of the bill which is then pumped out through the sides using a dense layer of fine lamellae or plates to filter and catch tiny particles of food. They can feed in groups using an arrowhead formation as this helps stir up more food in the vortex they create. Pelicans can also be seen feeding in this type of formation.

They can also use their bill to trawl along the bottom, their head fully submerged under the water.

These little ducks are able to breed all year round but only breed when the conditions are right. I have observed their breeding behaviour in relation to our other duck species and they usually wait until all the other ducks are done and dusted with nesting and flood waters are receding, then they will move in to breed and nest. Males help brood and raise the young but they generally form new pair bonds each time they breed.

Flood waters or wetlands need to be high enough for the receding waters to last during their nesting time as they place their nest on logs or vegetation just above the water line.

Pink - eared ducks can be very difficult to have in care due to their specialised diet. It is a real challenge to provide a food source which they will readily eat and provide enough of it to maintain and increase weight.

We currently have a Pink - eared Duck in care at Bohollow. Found away from water near Ruffy, I suspect she may have collided with something while travelling between feeding sites as she is suffering head trauma and not up and flying yet. Weight is also down. It will be a challenge to get her back up to where she needs to be for release but at the moment she is eating and doing quite well. Many of our water birds travel to new feeding areas at night and the Pink-eared is one of them. This would also explain her turning up away from water with no other Pink - eared ducks in the area. Cross fingers she will recover, put on weight and go on to be released.

With a bit of water laying around due to the decent rains we have had over the last couple of months, keep an eye out for this beautiful little duck in our surrounding wetlands.