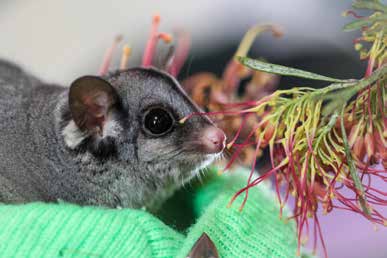 Some people are known to be morning people, I, myself have always been known as a bit of a night owl. I find the seclusion and peacefulness of the later hours soothing and a lot goes on out there with our native critters while most of us are sleeping.

Many of our Australian creatures are nocturnal, therefore are not really thought about and people do not even realise they are there.

Sugar Gliders certainly fit into this category. They are quite small, quick and agile and catching a glimpse of them at night is something special.

Sugar Gliders are in the possum family and have the amazing ability to glide through our forests. They are capable of gliding due to a thin membrane which is attached from each of its wrists to each ankle. When leaping from a tree, gliders outstretch their limbs, spreading this furred membrane out like a tiny paraglider, which allows them to glide up to 50m or more in one glide! We call this membrane the patagium. As this motion is a true glide and is not flying, over long gliding distances the glide has a steady falling gradient so they will land lower than the height they began their glide.

Their remarkable fluffy tail is as long as their body and is prehensile, enabling the glider to hold and hang off branches as well as acting as a rudder in combination with changing the angle and position of their limbs and membrane during gliding to steer and change direction.

Sugar Gliders are expert climbers possessing sharp claws and are able to run up and down tree trunks and along branches with ease.

Males are quite larger than females and it is common for one male to roost with several females in a hollow. Squirrel Gliders require hollows to camp in during the day and also seek refuge in at night from predators and extreme cold. During cold weather they have the ability to conserve energy by going into torpor. Torpor is a state where an animal lowers its metabolism to conserve precious energy. They do this on colder days or rainy days where food may not be easy to come by and can remain in torpor for up to 13 hours on these days.

In winter Sugar Gliders live in large groups for warmth but these larger groups will break up into smaller ones during the warmer months.

In Northern parts of Australia breeding can happen all year round but in Southern parts of Australia, our gliders tend to breed from August to December. Being a marsupial, the young are born very undeveloped and have to crawl through their mother’s fur into the pouch on their own after being born. Sugar gliders usually have two young which spend around 70 days in the pouch and another 50 days in the ‘nest’ before emerging to forage with their mother. Male gliders actively help look after the babes and help line the hollow nest with eucalyptus leaves.

At around 7 months of age the young become fully independent and will cease foraging with their mother.

Although Sugar Gliders in captivity can live up to 12 years, lifespan in the wild is only around 5 years old.

Sugar Gliders can make some pretty cool sounds. One of their calls reminds me of a small yapping dog, short, high yips. The other is a sound that is difficult to describe…it is almost a mechanical grating sound which doesn’t fit the glider’s cute, fluffy appearance.

Diet obviously consists largely of nectar, sap and pollen, hence the name Sugar Glider, but they are also ferocious little hunters of insects and even small birds! It is believed that a single Sugar Glider colony can consume up to 200 kg of insects in a year! I have seen them with large spiders in their tiny little hands, munching on them as though a delicacy.

These little animals are not considered endangered like their closest relative the Squirrel Glider, which we also have in this area, but they face many threats to their existence. Habitat loss and fragmentation is a big one. These little gliders prefer forest with wattle present in the understory as this provides a winter food source. Hollows are also a vital element for their survival.

The common reason Sugar Gliders come into care at Bohollow is due to cat attack and barbed wire entanglements. Barbed wire is a real danger for our wildlife and some species get caught in it more than others. Sadly, our gliders are one of them. Barbed wire can cause horrific damage, usually to their patagial membrane and is often a death sentence for these little possums.

If you have barbed wire fencing on your property, please consider removing it and replacing with ordinary fencing wire. The damage we see on a continual basis from all kinds of critters getting caught on this wire is truly heartbreaking and in cases where we are able to treat and fix the damage, the bird or mammal often dies purely through the horrific stress and pain of being caught on the rotten stuff for hours before they are found and rescued.

Sugar gliders also have quite a few natural predators. Birds such as owls and kookaburras, goannas, snakes and in areas they still exist, quolls, will all predate on gliders.

We have two captive bred Sugar Gliders here at Bohollow as part of our team of educational animals and they are delightful little creatures to be around. They assist in our teachings of habitat and conservation.

So if you are a night owl, take time out to listen and look around your garden and you may be lucky enough to spot one of these little gliders on their nightly forage. Our bushland and gardens can be busier than you think while most of us are sleeping.