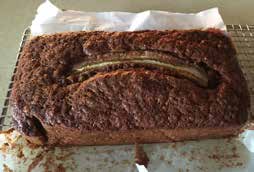 Apparently baking Banana Bread is a sure sign you’ve been in lockdown for many weeks. . . anybody who’s anybody has been baking Banana Bread. So when a few overripe bananas appeared in our fruit bowl, I thought I’d better have a go at it myself.

Just this past week, a recipe by Julia Busuttil Nishimura was published in the ‘Age’.