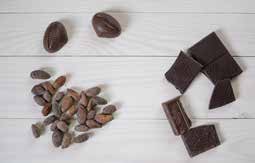 Hey Kids! In this edition we are taking a look into the delicious world of chocolate!

Chocolate comes from a fruit tree; it’s made from a seed.

Each tree yields 20-30 pods per year. It takes the whole year’s crop from one tree to make 450gms of Chocolate. Because cacao trees are so delicate, farmers lose, on average, 30% of their crop each year. Cocao is raised by hand, on small, family-owned farms. In addition to tending cacao trees, family members may harvest bananas or other fruit crops. Because the cacao pods grow so close to the trunks of the plant, they have to be carefully removed by hand by the farm workers. Some cacao trees are more than 200 years old, but most give marketable cocao beans for only the first 25 years. Through some programs supported by industry and partners including foundations and governments, farmers are now earning between 20 percent and 55 percent more from their cacao crops.

Most cocao farms are not owned by the companies that make chocolate. Worldwide, 40 million to 50 million people depend upon cocao for their livelihood.

Theobroma cacao is the tree that produces cocao beans, and it means “food of the gods.” Carolus Linnaeus, the father of plant taxonomy, named it.

About 70% of the world’s supply comes from Africa, with the Ivory Coast being the largest single producer and producing 30% of the overall supply.

How is chocolate made?

Making chocolate is a process that has many steps. First, the cocao beans are collected and put into containers to make them ferment. Fermentation makes the sugar in the beans turn into alcohol. Then the beans are dried and cleaned. Chocolate makers must cook the beans, and then crush them to make the cocao butter and the chocolate liquor come out of them.

After these ingredients are put together, the chocolate maker is still not finished. One of the last things to be done is something called conching. Conching means crushing the chocolate very finely and keeping it warm so that it is liquid. Before chocolate is conched, it feels very rough in the mouth instead of smooth. Conches use heavy rollers that plow back and forth through the chocolate paste under regulated speeds and temperatures. Conching for several hours to several days makes good chocolate. The last step in making chocolate is called tempering. The chocolate is heated, and then shaken, and then cooled a few times.

Have you ever wondered why chocolate melts so easily on your tongue?

The melting point of chocolate ranges from 26’C through to 32’C. It is the only edible substance that has a melting point below the human body temperature.

The cacao bean is native to mexico and both central and South America.

It’s believed that inhabitants of these areas first started cultivating the bean as far back as 1250 BCE, and perhaps even earlier.

Cacao was brewed in both Mexican and Aztec culture, though the result was nothing like today’s hot chocolate—it was a typically bitter drink that was often used for ceremonial occasions like weddings.

Cacao was once used as currency.

The Aztecs loved and valued the cacao bean so highly that they used it as currency during the height of their civilization.

After cacao and chocolate were introduced to Europe, travelling Spanish friars took it to various monasteries, handily spreading it around the continent.

The Fry and Sons shop concocted what they called “eating chocolate” in 1847 by combining cocao butter, sugar, and chocolate liquor. This was a grainy, solid form of the treat.

Milk chocolate was invented in Switzerland.

Daniel Peter created the tasty treat in 1875—after eight years of trying to make his recipe work. Condensed milk ended up being the key ingredient.

The first chocolate bar was made in England.

Way back in 1842, the Cadbury Company made the very first chocolate bar. A 2020 International survey found that Cadbury Dairy Milk is the most popular chocolate bar in the world, closely followed by the Mars Bar.

During the war years (1939-1945) Cadbury became the official supplier of chocolate to the Australian Armed Forces. Cadbury ration chocolate in brown-paper wrappers was supplied to troops in the field, made from a special formula so that the precious parcel did not melt in the heat of the tropics or the desert.

Cadbury operates two manufacturing sites – one in Claremont, Tasmania, and one in Melbourne.

Chocolate is a danger to our four legged friends

Chocolate should be kept out of reach of dogs. It can slow their heart and make them very ill and even kill them.