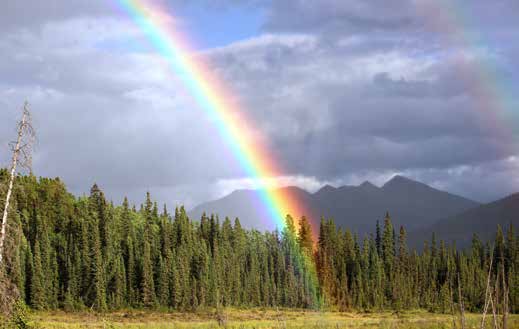 Hey Kids! In this edition of the Waranga News we are learning about different types of rainbows, how rainbows form, what colours can we see in a rainbow, and much more. And don’t forget to have a go at the Rainbow themed wordsearch!

A rainbow is a multi-coloured arc that forms in the sky.

Rainbows are created by both reflection and refraction (bending) of light in water droplets in the atmosphere, which results in a spectrum of light appearing.

A rainbow is created when light is bent (refracted) while entering a droplet of water and reflected. A rainbow is actually round. On the ground, the bottom part is hidden, but in the sky, like from a flying aeroplane, it can be seen as a circle.

A rainbow is not situated at a specified distance, instead it will always be visible to a person at the precise angle freshwater droplets reflect the light which is 42 degrees in the opposite direction of the sun.

A rainbow is not an object, it cannot be approached or physically touched.

No two people see the same rainbow, in fact even our individual eyes see slightly different rainbows. If someone appears to be standing under a rainbow you can see, they will see a different rainbow at the same angle but further away.

Rainbows can be seen not just in rain but also mist, spray, fog, and dew, whenever there are water drops in the air and light shining from behind at the right angle.

Sir Isaac Newton identified the 7 colours of the visible spectrum that together make up white light. All of which are present in a rainbow in the order red, orange, yellow, green, blue, indigo and violet (the acronym or name ROY G BIV is a good way to remember these colours and their order).

Most rainbows we see will be a "primary rainbow" whereby the colour red can be seen on the outer edge through to violet on the inner edge.

The sky within a primary rainbow is brighter than the sky outside of the arc. This is due to the fact that the millions of droplets needed to make a rainbow are spherical and overlap to create white light. At the edge however, these coloured discs don't overlap so display their individual colours producing the rainbow arc.

A "double rainbow" is where a second, much fainter arc can be seen outside of the primary arc. This is caused by the light reflecting twice inside the water droplets. As a result of this double reflection the colours of the second arc are inverted with violet on the outer edge and red on the inner edge.

The dark, unlit sky between the primary arc and secondary arc is called Alexander's band, after Alexander of Aphrodisias who first described it in 200 AD.

Very rarely, light can be reflected 3 or 4 times within a water droplet which produces even fainter tertiary (third) and quaternary (fourth) rainbows in the direction of the sun.

A "moonbow" is a rare lunar rainbow or night time rainbow produced by light from the moon. Our eyes see it as white even though all colours are faintly present.

A "fogbow" is formed by cloud and fog droplets, they are almost white with very faint colours visible. Fogbows are quite large and much broader than a rainbow.